I was probably around 18 years old when I first saw andaliman tree back in ”huta” (hometown). I remember my stomach began to sing when I stood under andaliman tree.. Hungry!!! we actually went for 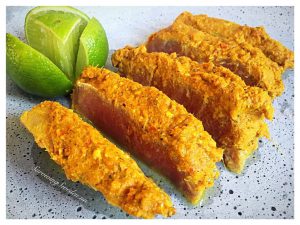 Batak food short after. Imagine how happy I was! The food served by my relatives was magic! They had lots and lots of Batak food, but there was one which I had never tasted before. It was fish covered with thick spices. I was a little bit suspicious, but when I tasted it was so delicious!! mmmm… Someone finally introduced me to ”Deke NaNiura” or marinated fish. Deke is fish and NaNiura means marinated. It was probably one of the strongest memory I have about Batak food. The combination of andaliman together with other spices truly enhance the flavor of the food in a way other spices cannot do. I told myself that I just have to learn how to make the fish! Besides andaliman itself, this delicious dish contains a type of flower called ”Torch Ginger” in English. I’ve got information that in England they use torch ginger as ornamental flowers, or something they put in a nice pot on the corner of their house. Back at my parents garden, they have a giant bush which has become the lifetime supply for us 🙂 In Indonesia we have different names for the flower such as : kecombrang, Bunga rias, honje, kincung, kincuang. In Thai they call it Daalaa or Siantan in Malaysian. I will talk more about this flower and later you will also find many other recipes which contains this beautiful and delicious flower.

Let’s get back to our Naniura. I’m aware that some of you might not be able to find all the ingredients such as this torch ginger. But give it a try anyway. Worse scenario, you could go to your Asian store and ask them if they could provide you with the flower.

(this recipe is adapted for starter portion)

app 300gr of tuna (according to the food industry, if you are going to consume raw fish, you will need to freeze the fish for at least 4-48 hours, and defrosted it in your refrigerator)

3 lime (big and juicy ones)

app. 10-15 cm fresh turmeric (Tips: *grill turmeric just a little bit – you can also use hot and dry pan and flip turmeric oven and over until. PS: no need to peel)

1 Torch ginger (as Mentioned earlier, if you have no luck with this flower, try this recipe without)

Red chili (according to your taste)

2 lemon grass(peel and take the white and young part)

Cook torch ginger for approximately 5 minutes and let it cool, then chop. You will also need to chop ginger, galangal, lemon grass and turmeric before you crush and grind them(this will make it easier to work with). Crush and grind them together with chili, garlics and shallots. Tips: **If you are using a mortar(pestle) use coarse salt to make it easier to grind. Add andaliman pepper up and continue to grind. Put chopped pecan, and finally put torch ginger and grind everything together. It is not necessary to grind these ingredients to a smooth paste. Let’s call this andaliman paste!

Pad dry your fish. Let it bath and roll completely in andaliman paste, sprinkle some salt and squeeze all your lime all over the fish. At this point, you can actually eat the fish directly, but I would recommend to at least let all spices absorbed for 1-4 hours in your refrigerator. Don’t forget to cover your fish with plastic foil. Before you serve, slice the fish to your desired size, either you eat it as an appetizer or main course with hot and steamy rice, let yourself decide 🙂

Tips! ***Andaliman is often accompanied with chili, lime and other strong spices. But never use too much garlic, ginger or cloves as it will take over the smell and taste of andaliman.

LANNYLEI HERE! AN INDONESIAN-SWEDISH WHO MARRIED MY UNIVERSITY FRIEND DAVID FROM ICELAND. TOGETHER WE HAVE TWO SONS ÓLIVER AND EVERETTE AT THEIR BEST AGE. WE SPEAK 4 LANGUAGES AT HOME, MAINLY SWEDISH. I’VE CREATED A MONSTER HUSBAND WHO WOULD CHOOSE MY FOOD OVER RESTAURANTS.
Read More…